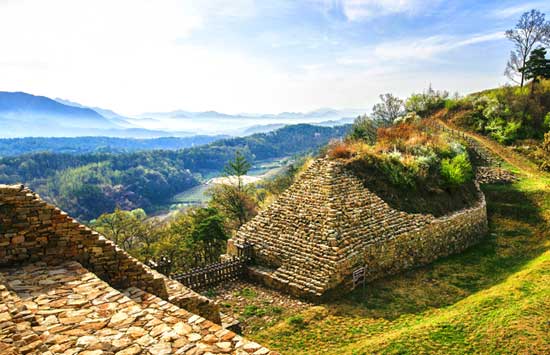 This mountain fortress wall located in Ojeongsan, Boeun eup, is stone wall whose circumference is 1,680m.
Along the ridge of the mountain, there are 4 gates, 7 ongseong (half-circle shaped small and strong fortress connected to the wall designed to protect the wall from enemy attack), 5 wells, and a drainage. The wall was constructed in 470, and repaired in 486. The reason why this wall was named Samneonsan Seong is not clear.

This wall is a pogok-style wall (the style of building a fortress wall which contains a mountain stream to secure water). By repeating the process of setting stones by width in one layer, and by length in the upper layer, the wall became strong. It is 13~20m high and almost vertical. Various relics including earthen wares of the Three Kingdoms, Koryeo, and Joseon eras have been extracted here, which proves that the wall had been used across ages.

Silla could unify the peninsula partly by securing this area. Afterwards, It was used as the headquarters of the Kim Heon Chang Riot forces in the Unified Silla era in 822. Wang-geon failed to secure the wall in 911, and it was again used in the Japanese Invasions (1592-8).