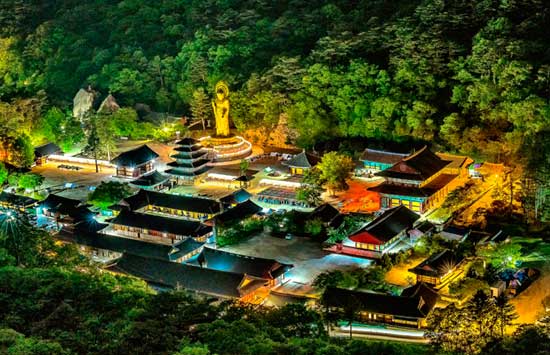 The Beopjusa temple is regarded as the face of Boeun, and located on the slope of Songnisan mountain.
It was founded by Eusinjosa monk in 553 AD (14th year of king Jinheung of the Silla dynasty).

'Beopju' means that truth, or scriptures of Buddha reside here, and 'sa' is temple. Since its foundation, the temple has gone through rebuilding, addition of new structures, and repair many times.

New structures were added two times in the Silla era in 720 (19th year of king Seongdeok), and 776 (12th year of king Haegong), from which the temple began to take on the shape as a big temple. In the Koryeo dynasty, the temple was also considered as big and influential. During the time of Hong-geon-jeok invasions (1359-60), king Gongmin visited the temple on his way returning to the capital, Gaegyeong, after escaping to Andong from the invaders. In the Joseon dynasty, Taejo, the first king, is rumored to have held 100 days' prayer here before taking to the throne. King Sejo is also said to have held 3 day prayer at Bokcheonam, subsidiary temple of Beopjusa to cure his disease. During the time of Japanese Invasions (1592-8), the temple was the headquarters of monk sodiers from Chungcheong-do, and, because of that, the whole temple was burnt down by Japanese soldiers. After the 7-year war with Japan, Samyeong Daesa monk, the commander of the monk troop began the job of rebuilding it, which lasted until 1626. There were other small and big repairs, afterwards.

Over half of the Cultural Properties of Boeun county are concentrated in the Songnisan area. In Beopjusa, there are three National Treasures. In addition to Cultural Properties designated by the government, the temple is full of things to see — Cheonwangmoon gate at the entrance of the temple, Seonhigoong Wondan, which once enshrined the wipae, motuary tablet, of the mother of the tragic crown prince Sado Seja who was killed by his father king, The Higyeon Bosal statue who burned himself to serve Buddha, and rice storage barrel enough to contain 80 gamas (one gama is 100ℓ of rice), and big iron kettle.(※ The bronze Mireuk statue was named the Geomdong Mireuk Daebul by the special rite in June 7, 2002.