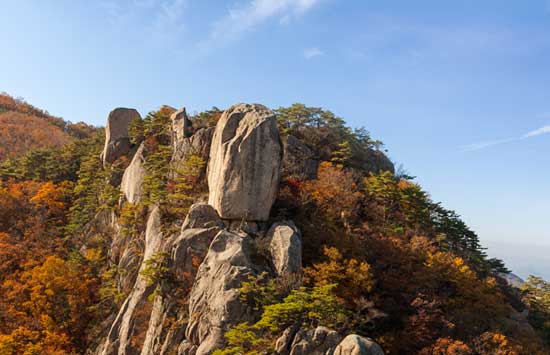 The Songnisan mountain, one of eight Wonders of Nature in Korea, is located at the center of the Sobaeksan Mountain Range extending southwest from the Taebaeksan mountain.

To the south of Songnisan, the Baekdudaegan Mountain Range (continuous lines of mountain ranges coming down and across the Korean peninsula from the Baekdusan Mountain, the highest mountain in the Korean peninsula on the border of Korea and China) runs along. In terms of administrative divisions, Songnisan is located on the border of Boeun gun (county) and Gwoesan gun of Chungcheongbuk-do province and Sangju si (city) of Gyeongsangbuk-do province. In geological viewpoint, the mountain, 1,058m above sea level, is mainly composed of granite, but metamorphic sedimentary rock is added to granite. The granite part of it rises up sharply, but its sedimentary rock part has been eroded and cut deeply over time, resulting in its beautiful scenery of sharp granite peaks and deep valleys. The mountain is also called Gwangmyeongsan, Mijisan, or Sogeumgangsan.

Grotesque peaks and thick forest covering the whole mountain, matching well with the one thousand old Beopjusa temple in it, makes a beautiful view. There are eight bongs (peaks) including Cheonwangbong which is the highest, Birobong, and Moonsoobong, and eight dae (flat and wide rock) including Moonjangdae, Ipseokdae, and Sinseondae, and eight rock passageways.