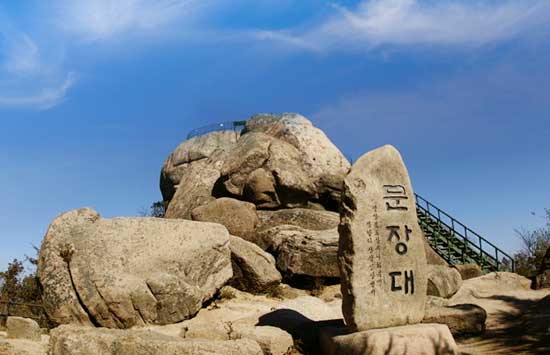 King Sejo stayed here for his medical treatment.
One day, a noble-looking man appeared in his dream, and told him that, there was a peak 16 ~ 20km to the east, and, if he prayed on it, he would recover from the disease. When he climbed up to the mountain with his aides, he could see a shining peak covered by cloud and fog. But, since the rocky peak was too stiff to climb, he ordered his aids to drive iron nails on it and set up ropes.

When he reached the peak, he found out that there was a book on wide and flat rock. The book was on the five moral rules and the three basic principles of Confucianism. Moved by the contents of the book, he spent the day discussing contents of the book with his officials. Afterwards, the peak became to be called Munjangdae (mun means book, jang store, dae flat board). Or it is called Wunjangdae (woon means cloud).