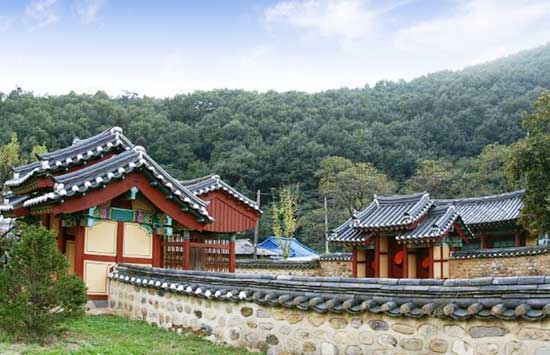 The Sanghyeon Seowon was founded in 1594 (4th year of king Myeongjong), and it was the second seowon whose name board with royal calligraphy was sent by the king in 1610, after the Sosoo Seowon, the first seowon of Korea.
Though wipaes of three sages were shrined at the beginning, t재 other sages — Joongbong Jo Heon and Wooam Song Si Yeol — were added later.

The history of the Sanghyeon Seowon began when local scholars shrined the wipae of Kim Jeong, eccentric and brilliant confucian scholar from this region. Later, while An Hwang, government official, was promoting the construction of a seowon, Seong Jae Won, new head of hyeon, cooperated him to build the seowon within the site of the Samnyeonsan Seong, mountain fortress wall. During the process, King sent the hanging board of the Seowon title.

The Seowon was moved to the current location in 1672, but demolished in 1871 when Daewongun, then the powerful man, ordered all seowons except for some to be demolished. The current structure was built again in 1949, and disassembled and rebuilt in 1986. It is wooden tile structure of 3 rooms at the front, 1 room on the side, double eaves and gambrel roof.