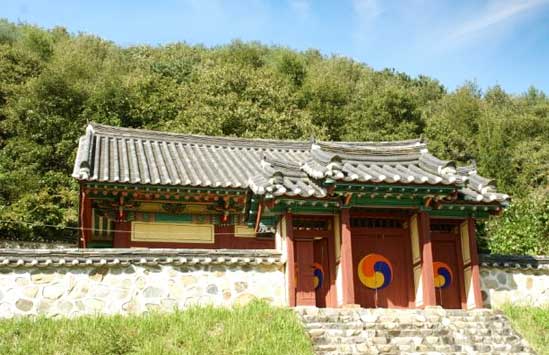 The Hwoein Hyanggyo was founded in the King Sejong era.
When the building was destroyed by fire during the Japanese Invasions era (1592-8), The hyanggyo itself was combined with Boeun Hyang-gyo temporarily. In 1611 (3rd year of king Gwanghaegon), it was rebuilt. Later, it was repaired several times (1924, 1941, 1952, 1971).

The principle of the building arrangement is hoomyo jeondang (shrine on the back side, school on the front side). The Daeseongjen, shrine, is composed of 5 rooms at the front, 3 rooms on the side, and gambrel roof. In it, Confucius at the center, 4 saints, 10 philosophers, 4 sages of the Song dynasty, and 18 sages of Korea are shrined.

Myeongryundang, lecture hall, is wooden 2-story building characterized by 5 rooms at the front, 2 rooms at the side, and paljak-style roof. It is viewed that the ground floor was originally an empty space serving as the gate, but, later, was closed with walls. For three years since 1979, it was under overall repair: Daeseongjeon and Nesammoon gate were disassembled, and rebuilt; The walls and floor of the Myeongryundang were cleaned, and its roofing tiles were changed into new ones; Prefabricated fences were changed into stone ones.

During the Joseon dynasty, the state supported the Hyang-gyo with land, books, and slaves, and one lecturer taught about 30 students. However, with the adoption of new educational institution after the Gap-o Reform (1894-6), the educational function of it ended. Currently, worship rites are performed in spring and fall, and on the first day and on full moon day of each lunar month, brief worship rites are preformed.