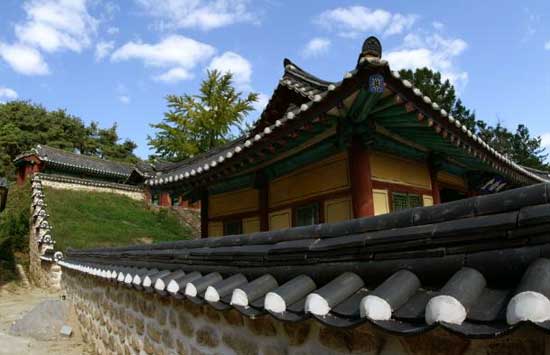 The Boeun Hyanggyo (local school working also as confucian shrine) was founded in King Sejong years of the Joseon dynasty to conserve and worship Wipaes (mortuary tablets) of wise confucian scholars, and to educate and teach local residents.
Since the King Injo era, it was rebuilt and repaired many times. Remaining buildings are Daeseongjeon and Myeongryundang, etc.

Myeongryundang is what once was the lecture hall of the Sanghyeon Seowon which was demolished in 1871 when Daewongun, then the powerful man, issued the Seowon Demolition Order. It is a wooden structure characterized by 5 rooms at the front, 2 rooms on the side and gambrel roof.

In Daeseongjeon, Wipaes of 5 sages, 10 philosophers, 6 sages of the Song dynasty, and 18 sages of Korea are enshrined. During the Joseon dynasty, the state supported it with land, books, and slaves, and lecturers taught students. However, with the adoption of new educational institution after the Gap-o Reform (1894-6), the educational function of it ended. Currently, worship rites are performed in spring and fall, and on the first day and on full moon day of each lunar month, brief worship rites are preformed.

It possesses some books — collections of some scholars including Soonamjip, and Gongbooja Seongjeokdo (Life History of Confucius)