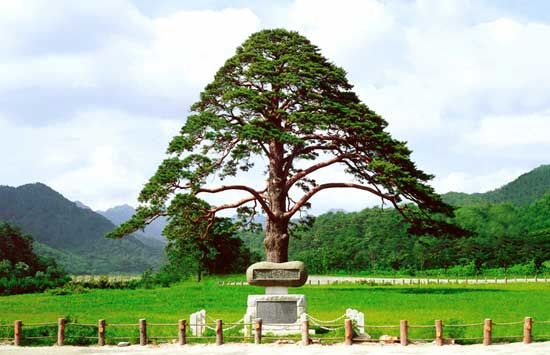 It is located on the way to the Songnisan mountain. The road passes by the tree to the east, and a stream called Songnicheon, starting from Cheonwangbong, peak of Songnisan, and a branch of the Han river, flows by the tree to the west. There is a scar on the bottom part of the tree showing that it went under a surgical treatment in the past.

This tree is well-known as the symbol of the Songnisan mountain. It is interesting that that tree has a name related with the second highest status rank of the Joseon dynasty, jeong-ee-poom. It is derived from a legend.

King Sejo was suffering from a skin disease, and he frequented to the Onyang Hot Spring nearby and Soongnisan to treat it. One time in 1492, passing under the tree, and noticing that the palanquin he was riding on might touch a branch of the tree, he cautioned the pelanquin carriers, "Watch out. Palanquin may touch the branch." Then, strangely enough, the branch rose up of itself to let the palanquin pass under it, according to the legend.

And, on the return way to Seoul, he and his troupe could use the tree as cover from summer shower. Thankful of its kindness, he bestowed the honorary rank on the tree, according to the legend.